Which will be in September.

I was honoured and enchanted to be asked to participate in this exhibition, by invitation from the Italian Cultural Centre in Vancouver.

I was, and still am, delighted to have been given the image of Empress Theodora. I visited Istanbul in 2013 and became acquainted with Theodora and learned many intriguing details about womenʼs lives in the Byzantine era.

As a result of this personal experience and connection, I felt implored to translate the image of Empress Theodora almost verbatim; elaborating on the mosaic tiles depicting Theodora and her attendants.

In addition to a translation of the mosaic, I chose to embellish Theodora as a moderately inconspicuous illustration of the female figure; an all-inclusive representation of women and our contributions to society.

As I was stitching the recurring tile pattern and the female forms, I realized that my piece could be fully reversible, and by extension, represent more than just one “side” of the story. I wanted to illustrate the range of expression and adaptability of women, in both ancient and modern times.

My process involved an initial design draft on watercolour paper, whereby I was able to iterate further and get a feel for the mosaic interpretation, and the “quilt- like” background you see in my finished artwork. I was determined to make marks that represented tools that women of the Byzantine era included in their works, such as spindle whorls, looms, needles and sewing tools. 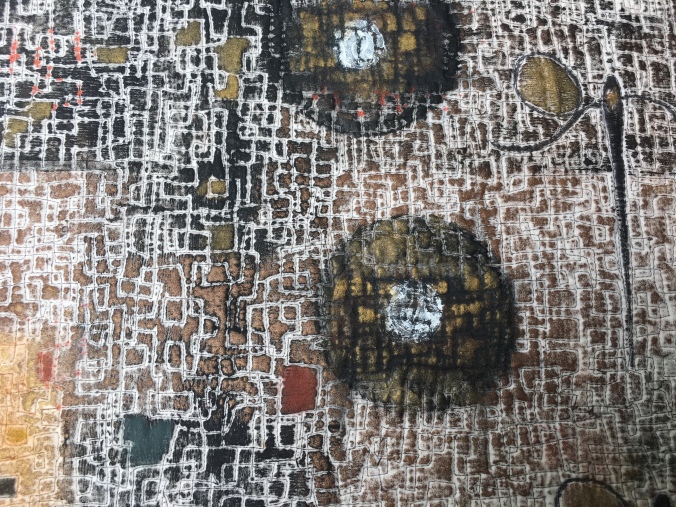 So I have had much fun over the past week, painting into the textured surface of the back of the quilt . A blank canvas to create something completely opposite to the other side.

I have used Dynaflow dyes and textile paint, printing inks and shiva sticks. Now to add stitch to the female figures and buttons and beads to the overall surface. 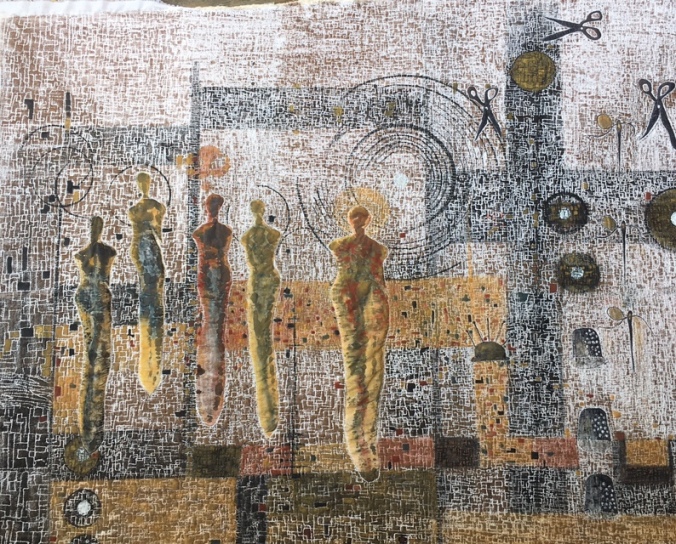 Will post the reverse side once I start on it later today.

As you will soon see one side represents the rich lifestyle of Empress Theodora and the other side will depict the more mundane life of the average woman then and now. 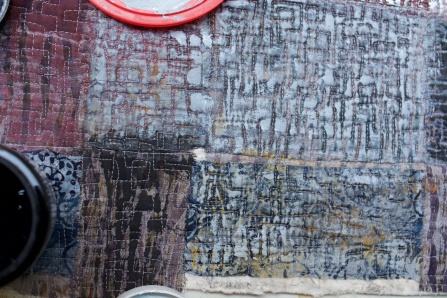 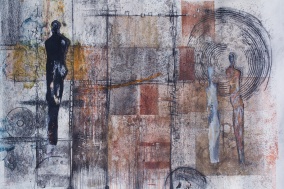 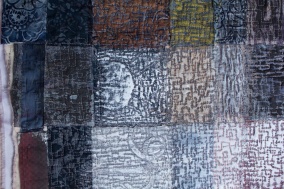 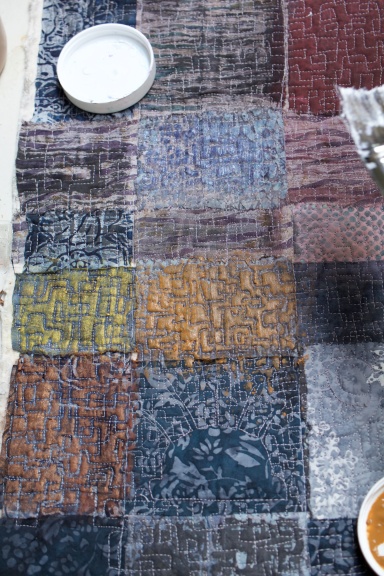 I have been working on a piece for the “Womens Work” show I mentioned earlier this year.

The image I have been given for my inspiration is of Empress Theodora who ruled with Emporer Justinian in 500 BC during the Byzantine era. This is the only image of her and it is a mosaic situated in Ravenna. 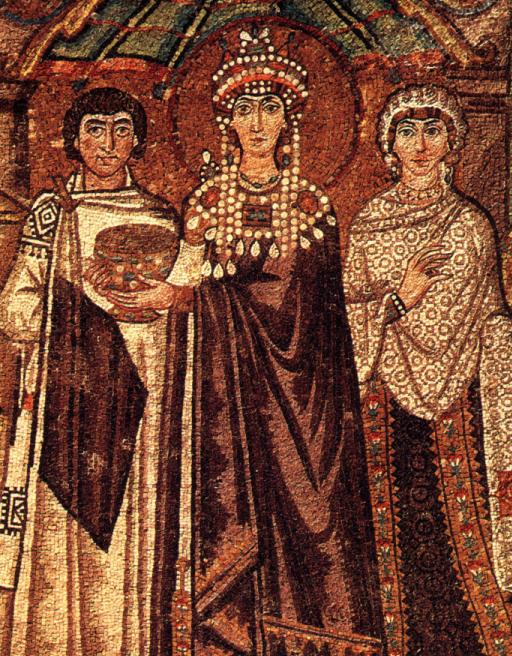 I have been working my design first with pastels on watercolour paper. 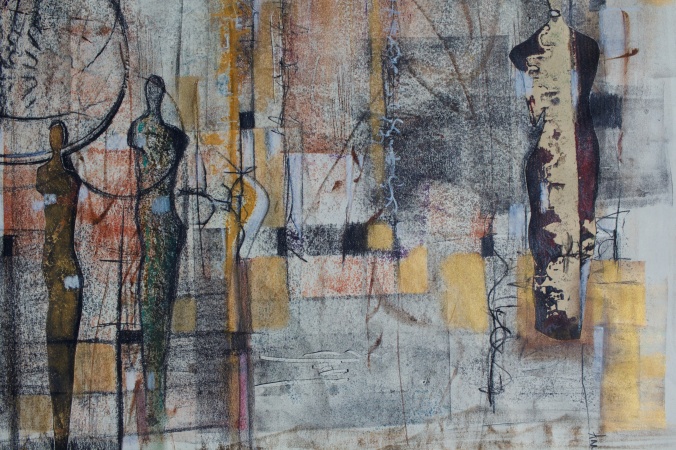 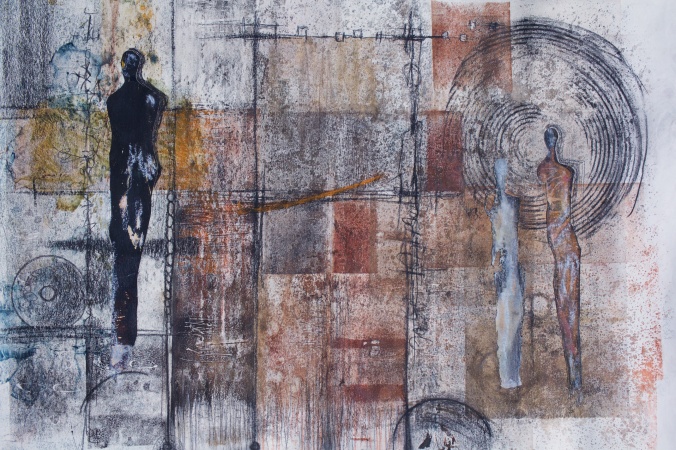 …and then loosely weaving strips of torn fabrics together and quilting this background to give me a mosaic efffect . 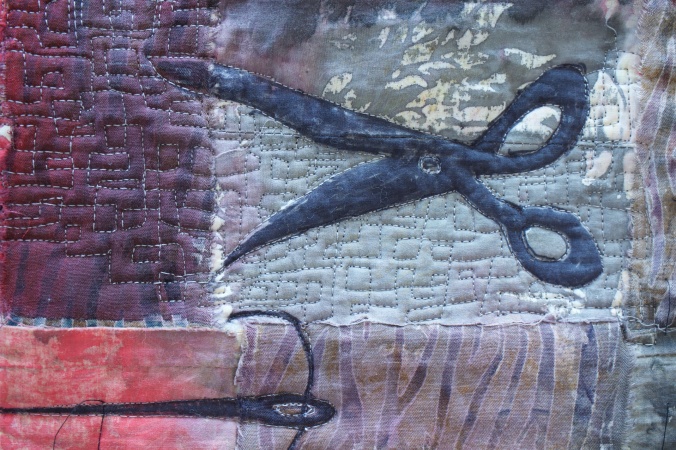 I have then been painting back into my design with textile paints/shiva sticks/oil pastels to give my piece an antiqued look. Below is the sample piece I created to audition the paint techniques ………………… 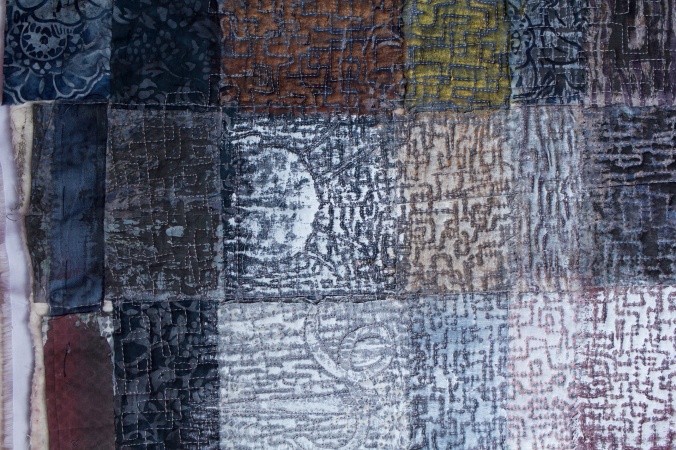 Gosh……….so many choices for colour and texture……..which one do I choose?

And the back is a blank canvas to do another colour scheme altogether. 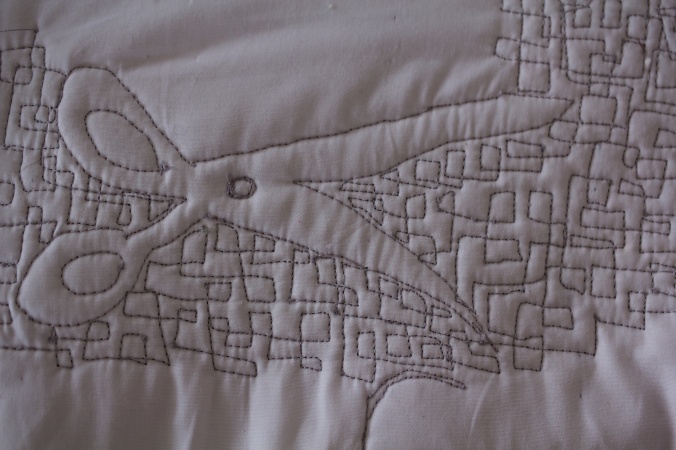 Will post more images once I make some decisions about the front and back!………..

Well the Horseshoe Bay group have managed to pull it off again… well almost……we are doing the Artwalk again and I hope you can drop in to look at some of the artists. I am probably going to be at Helen Weiser’s house this year along with a couple of other artists. Do click on the link and check out the schedule. Anni 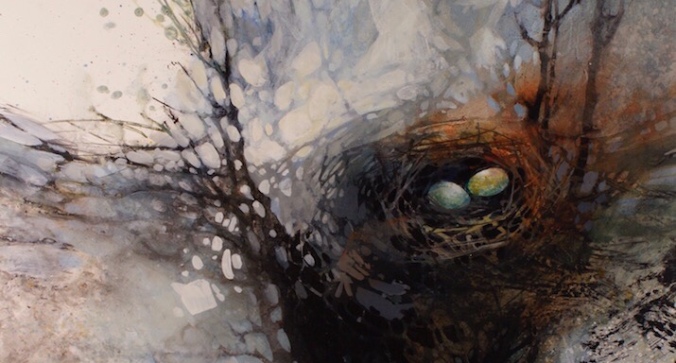 A beautiful quote this morning from one of my favourite Facebook friends Robyn Gordon………….she always seems to capture my mood or feeling at the present time………….and chooses beautiful images to go along with the quotes she finds. At a time when my husband is questioning if Facebook is really necessary or useful to me………she comes along with another great post. Feeling blessed to be able to live the life I do and able to physically get around and enjoy my surroundings…………

Take a look at this link, a look at some passionate textile artists! 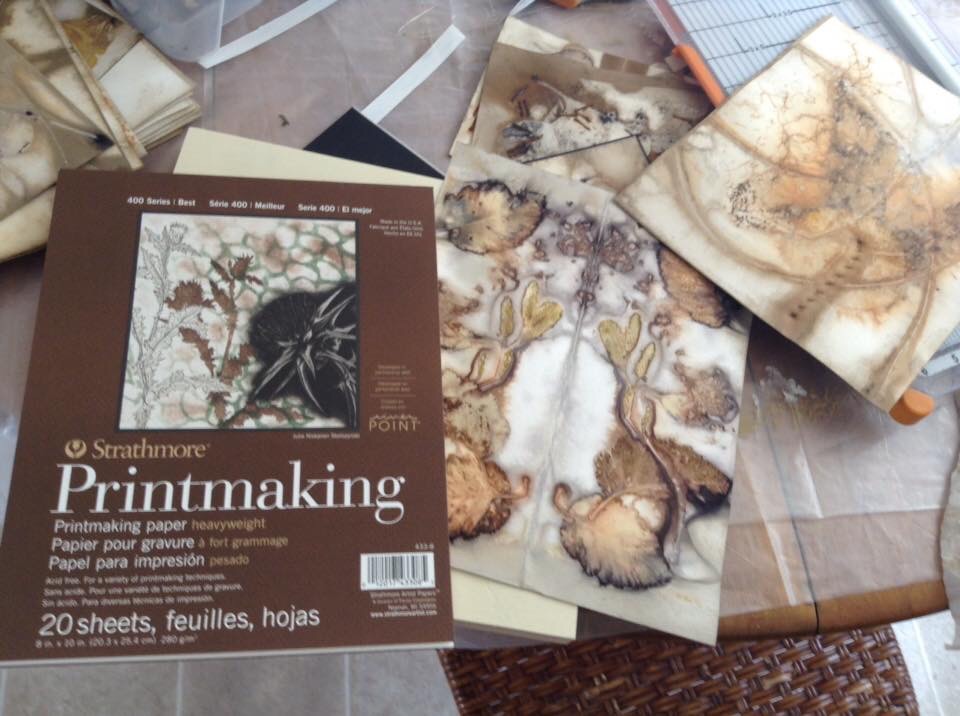 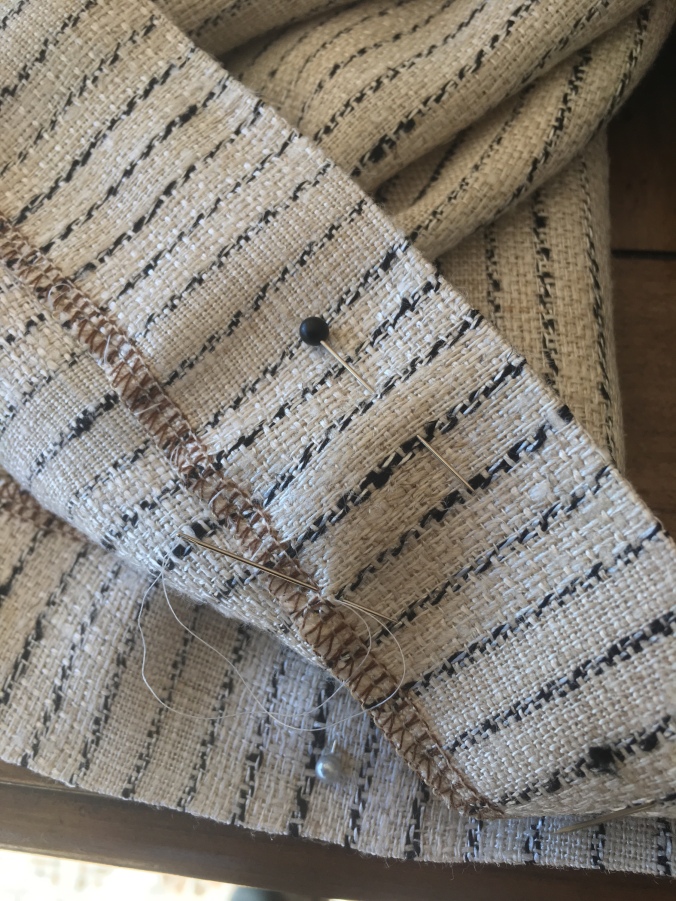 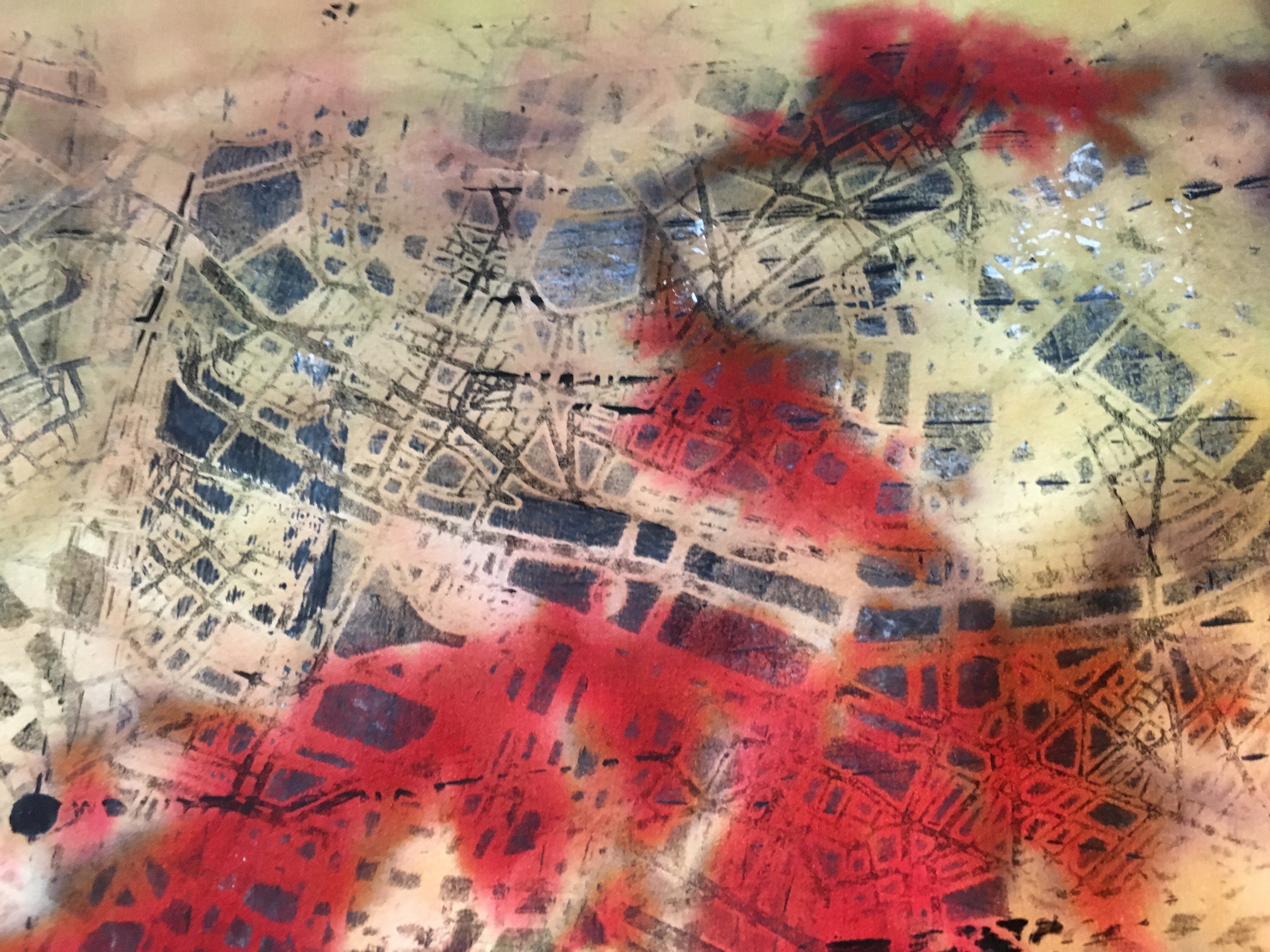 I have been working alongside an Italian Suit maker/designer for the past 18months- painting,dyeing,printing , stitching bespoke linings for his amazing suits. It has been quite an exciting ‘ride’ meeting lots of very famous people and getting to know what is near and dear to them to have it printed on a jacket lining. The energy of the group is what keeps me going back for more.

Dino Minichiello is the mastermind behind all this and he comes by the talent honestly. His father was making suits for the rich and famous for many years. He has taken it to whole new level since his father passed and is keeping up the family tradition and more by brainstorming and thinking outside the “Fast Fashion” box.

The down side is that it is a bit like doing a commission (which I said I would never do) but the upside is that most of the clients want to take a risk and have something wild and colourful on the inside.

The project is just coming into it’s own now, so I thought I would share a little bit of the process as we go along.

Dino has been making a movie about the process and it was my turn this last week to be shot doing some of the linings and my processes on my artwork.

So here are the bits that made it to the clip.

And the password is tgl to see the latest video.

Ps I know they spelled my name wrong……..hopefully it can be corrected.

I have been having fun throughout the summer printing with leaves from my dried stash.

But I have waited until now to use the leaves I collected from my Mums funeral wreath. It was with trepidation and held breath that I gently placed them on silk organza and linen to try and get a double print so that I could share it with my two sisters.

I am pleased with the results and now will have the pleasure of sitting in the Fall evenings and stitching into the pieces thinking of my family and the times we shared. 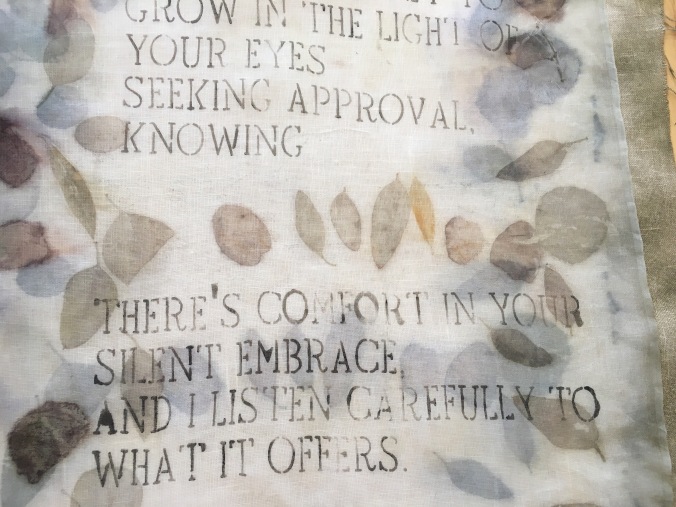 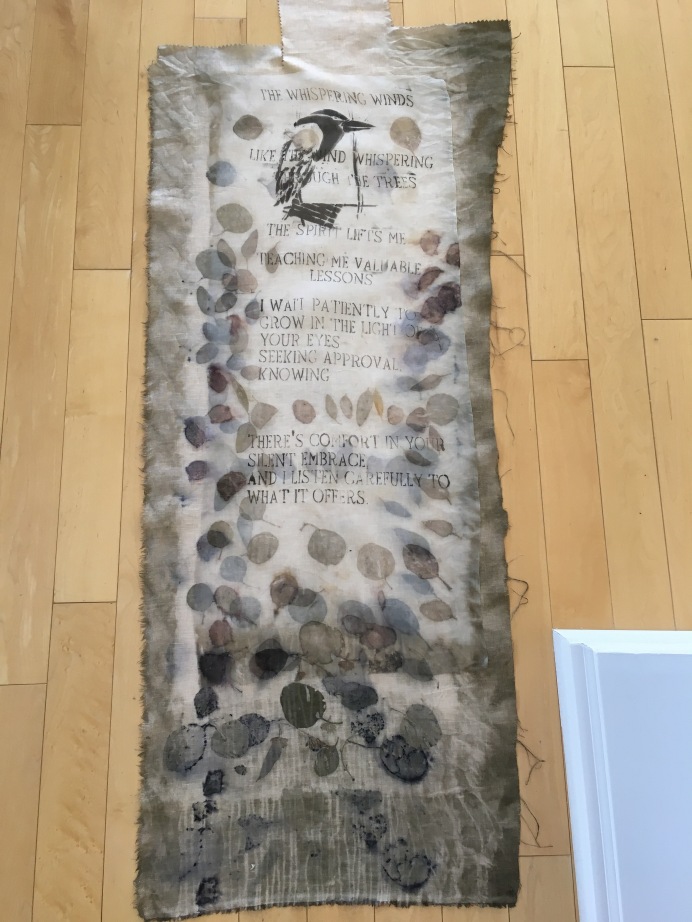 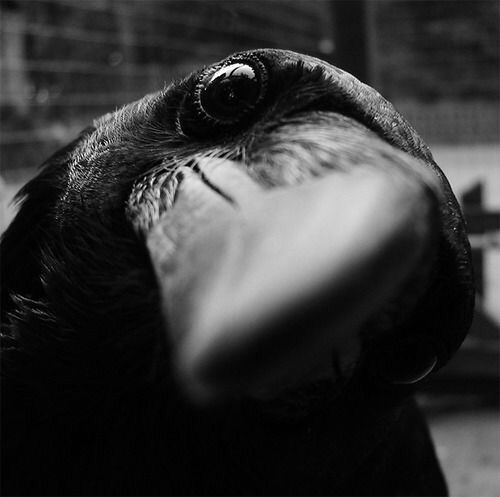 BY THE COLOUR OF MY NAILS!! 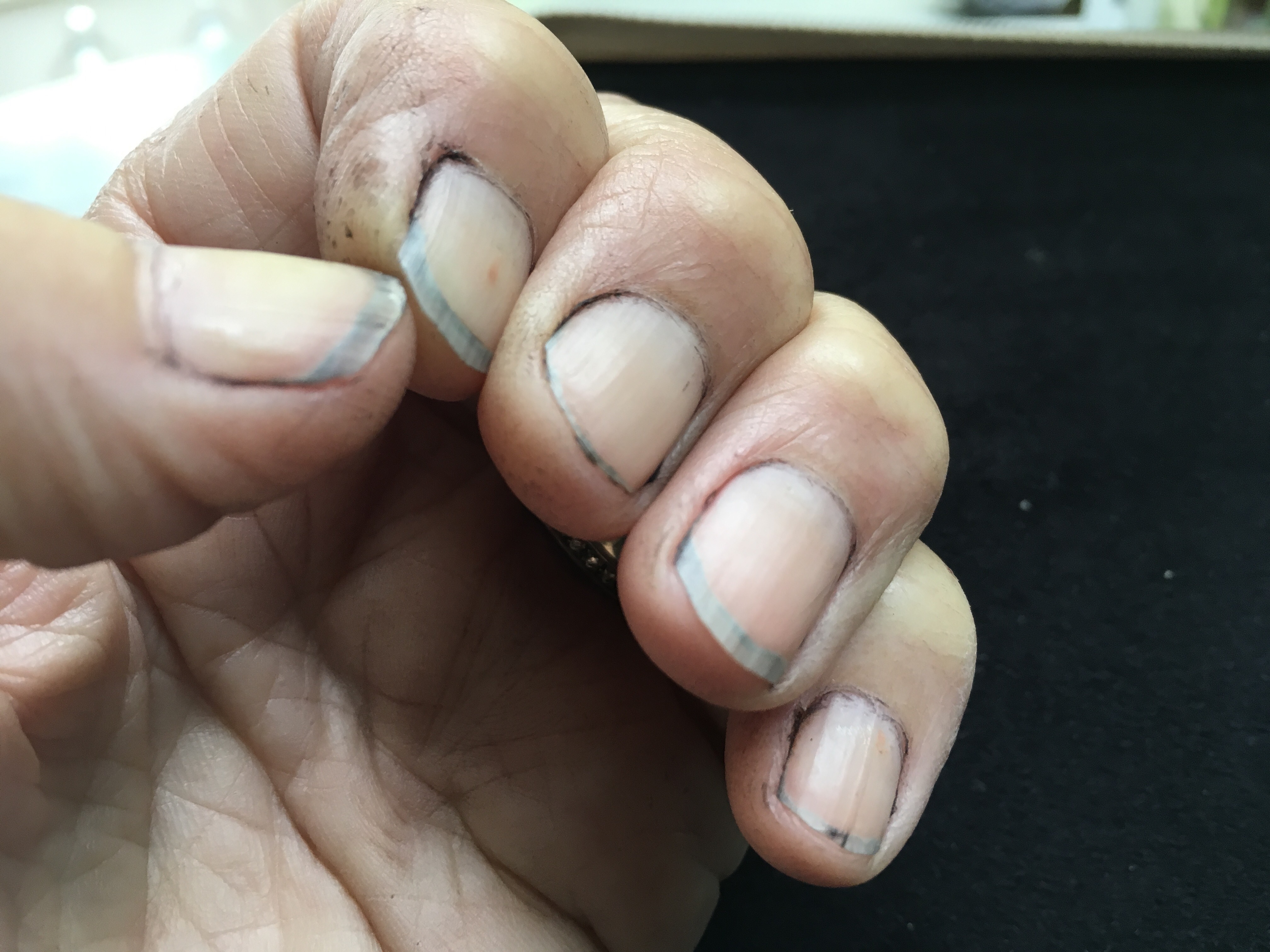 All that rusty iron water manages to get in somehow!

Cashmere/lycra jersey material with an Eco print of eucalyptus and cheesecloth! 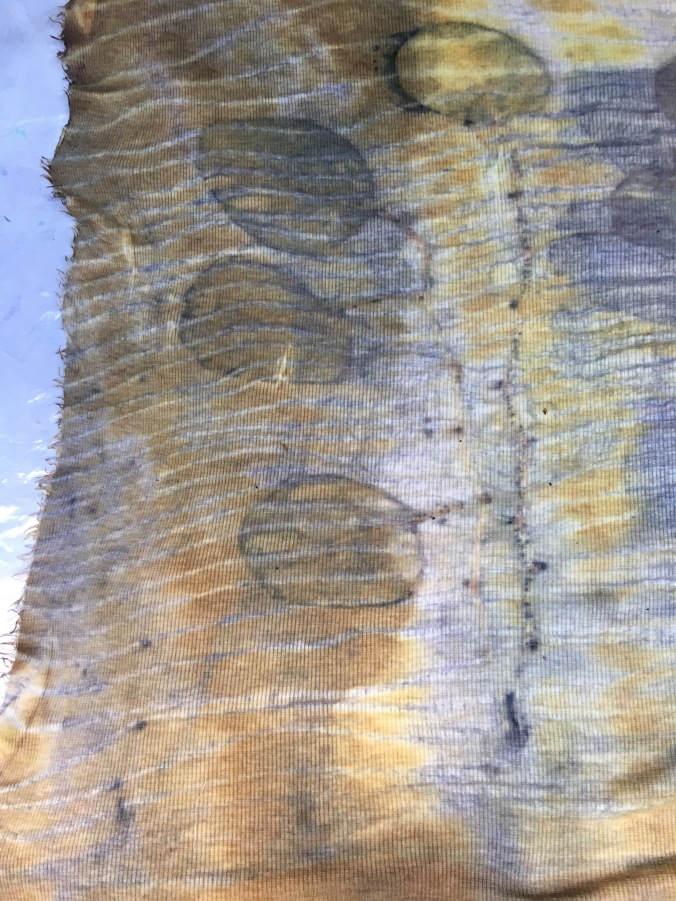 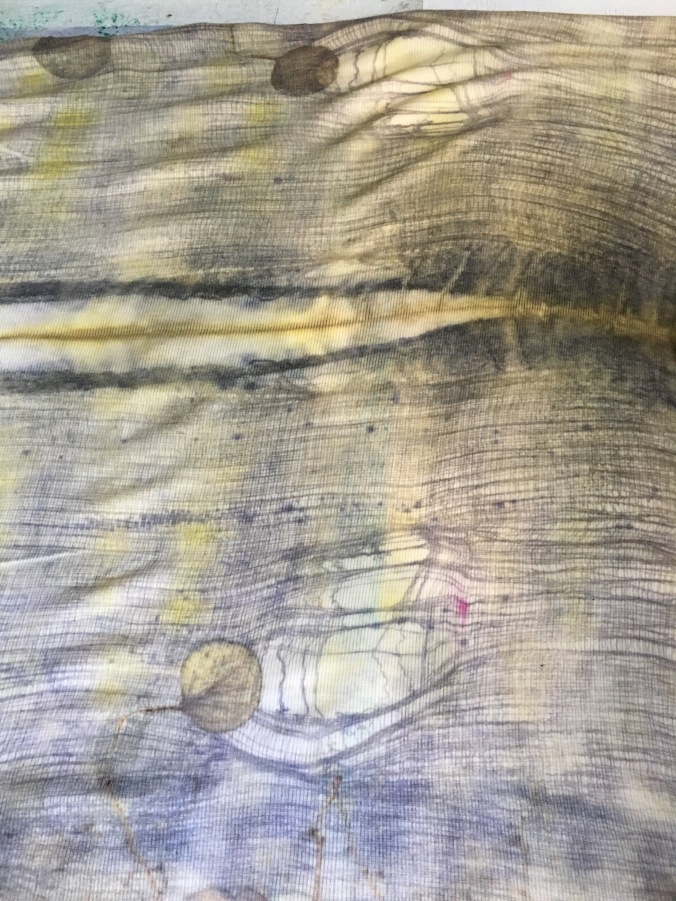 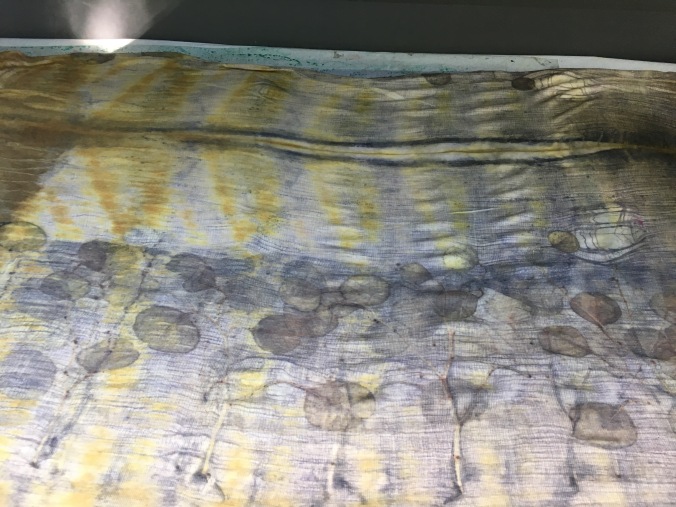